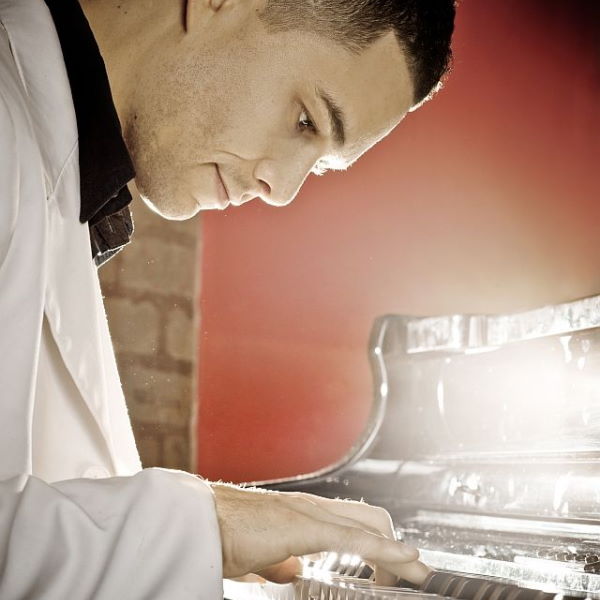 Born in Melbourne, Australia, to an English father & South African mother, Justin Stephenson was raised under the influence of a very musical family & began singing and playing piano at the age of 3. Since graduating with a Bachelor of Music degree in 2001 (majoring in Jazz Vocal) in Brisbane, Justin has taken his talents to Sydney and Melbourne, notably the Australia Day celebrations at Hyde Park in Sydney in 2001, and at the Melbourne Jazz Festival in 2004. Both of these performances were in collaboration with his two aunts – Trude and Anastasia Aspeling who are accomplished vocalists in Sydney & Melbourne respectively. Justin has also performed with the likes of soul/funk singer/bassist Doug Williams, & master Melbourne jazz pianist Bob Sedergreen, as well as Bob’s son, Stephen, also a jazz pianist. Justin has an endless number of vocal & musical influences, including the many talented musicians he has been closely associated with over the years. J-Funk has been influenced by artists who excel in the studio and in live shows: Stevie Wonder, D’Angelo, The Roots, and Patrice Rushen are the greatest. These influences shine through in his brilliant vocal and band arrangements and compositions. Justin has the excellent ability to perform, sing, work the crowd and MD his musicians all at once! Justin has also been able to use his vocal, composition & arranging talent for the Lords’ work, having been brought up a NEW APOSTOLIC Christian, arranging for the churches’ choirs & orchestras in Australia & the UK. Since relocating to London UK in 2006, J-Funk has created & recorded many tracks, compiling his debut album entitled “Breakthru”. The J-Funk creations embrace the “Funkasoul” genre, blending catchy melodies, slick vocal & instrumental harmony, funky rhythms & jazz orientated chords. In early 2007, J-Funk made it through to the London Final of the “Live & Unsigned” competition, after competing with over 10,000 entrants and progressing through many preliminary stages. 2007 & 2008 saw many great live performances showcasing J-Funk’s debut album “Breakthru” all over London and the UK. But in 2009, J-Funk was chosen from hundreds of talented submissions as the winner of the Ismael Records online talent search. The new J-Funk album, Meant To Be, was released in September 2011.

In 2013, J-Funk began a new chapter in life, relocating back to Brisbane, Australia, and is now performing regularly in venues in Brisbane and on the Gold Coast, as well as performing at corporate functions around Australia.